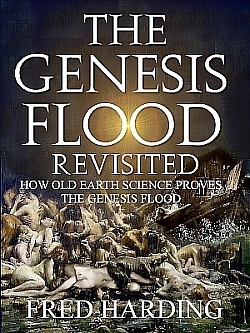 "What do we know of Doggerland's final days? It appears that the final sea level rise that made Britain an island was no gradual inundation."

PRE-PUBLICATION: This ground-breaking book is to be published in the near future (Spring 2021), and here is a copy of the PREFACE which gives you an idea of its content.

It is with considerable excitement that I write this book because for the first time for over a hundred years the concept of a global flood occurring in recent times when man lived on the earth is now generally accepted by the academic science community. I bet you did not know that, did you?

Although irrefutable evidence of global flooding from all over the world is now beyond doubt, I do not mean that this is the world-wide flood which Young Earth Creationists (YEC) have embraced. Theirs is one which they say the flood waters that is described in Genesis covered the entire earth and all the mountains and that all land animals and birds along with many sea creatures that were not saved in Noah's Ark perished. In contrast, the global flooding that geologists now endorse and about which I speak differs substantially from that of the YEC model although there does appear to be some evidence overlap which can be resolved when the data is examined more closely.

Today, scientists the world over now recognize that a mass extinction event which involved world-wide flooding occurred in the very recent history of man. It was one in which saw the extinction of numerous predominantly larger species of animals all over the world. But the earth was not flooded in such away that the mountains were covered over as Young Earth Creationists have claimed. YECs have misinterpreted the Bible as I will establish and this has clouded their understanding of the Genesis Flood big time.

The extinction event now acknowledged by geologists caused flooding on a colossal scale around the world. Sea levels rose abruptly, lands were drowned, countless animals were destroyed, many people were killed and the earth suffered a dramatic global climate change. For example, the once lush Sahara became a desert and the endless temperate grasslands of Siberia that had fed huge herds of mammoths for thousands of years were transformed into a cold and wintry wasteland virtually overnight.

Now here is the rub. The global flooding of the extinction event of which I speak also happens to coincide with the date of Noah's Flood (3554 BC) when that date is correctly ascertained from the scriptures and the dating methods used by geologists have been fine-tuned. Once this is done, such convergence is truly breathtaking.

Do not be fooled in thinking that this is a sequel to The Genesis Flood by Young Earth Creationists Whitcombe and Morris published in 1961. What I am presenting is a radical new look at the Genesis Flood but this time against the backdrop of Old Earth Geology, together with a reappraisal of the Biblical references that Young Earth Creationists have made. This has never been done before because it is only now that the jig-saw pieces of the global flood has been recognized by the academic community and all the pieces have fallen into place.

For a hundred years or more the story of Noah's Flood has been ridiculed but it is time to put such ignorance aside and set matters right. It is the purpose of this book to present to the reader irrefutable evidence that a catastrophe of global proportions struck the earth and wiped out dozens animal species. The climate changed so dramatically that animals that had once flourished in temperate zones found themselves suddenly living in a frozen wasteland, where they could not survive. Sea levels abruptly rose everywhere as devastating tsunamis accompanied by tempestuous winds swept away all before them without mercy. The coastlines of the world changed as if overnight by the world-wide flooding, and great swathes of land that had once been rich in vegetation and filled with animal life became deserts. And, all this was witnessed by man all over the world during the days of Noah.

Those people that somehow survived the global catastrophe did not keep silent about what happened but passed the story on to the descendants so that the memory of it was not forgotten. That is why Flood stories have been documented in Mesopotamia, Egypt, Greece, Syria, Europe, India, New Guinea, Central America, North America, Australia and South America. In fact flood stories are to be found all over the world, without exception.

The evidence that I present in this book is provided by geologists, climatologists, archaeologists and other scientists from a host of peer-reviewed journals and media outlets. I have assembled pieces of knowledge that these scientists have identified and together they show that the Flood of Noah did actually happen about 5,500 years ago and that it was global in extent. I invite you to join me on this exciting journey of discovery as we examine that evidence and see how for the first time, Old Age Science has vindicated the Bible. It has been a long time coming.